My Circle of Stones


My Circle of Stones

A bit of explanation here:  I was invited to join the Draig Sidhe by some friends of mine and I have done so.  This was the first step.  I had to make a rosary using the instructions from “A Circle of Stones” by Erynn Rowan Laurie.  As you saw, I reviewed her Revised version here on the Journal.  The link above leads to the author’s website to let you buy it directly from her.

So, now I have more to learn, and it’s going to be an interesting trip.

Well, I’m going to post the pics, but I plan on putting up a longer “how to” and “why I did” for all this.

Click on the picture to see a higher resolution version of the picture.

First pic is the completed piece. 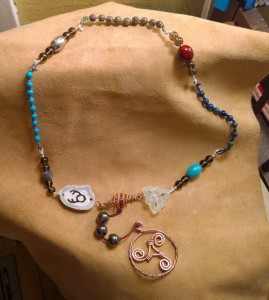 This is the medallion, cauldrons for the Inner Fire, but actually the Three Cauldrons of the Song of Amergin, the Spiral Gate, and the God and Goddess beads. 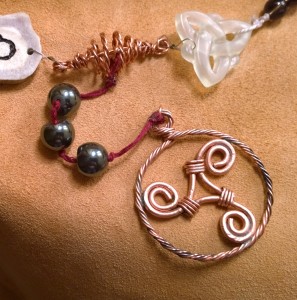 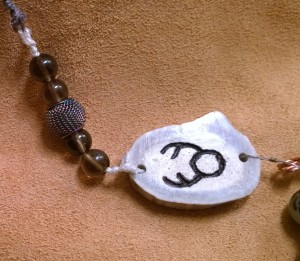 The Sword of Nuada. It’s a steel bead and since it’s a cast bead, it is very heavy. Same Smoky Quartz North Wind beads. The Sky is to the left and the Land to the Right. 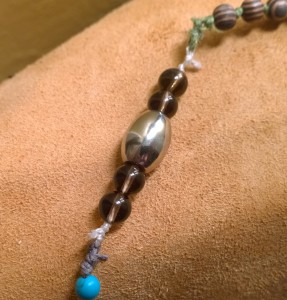 This is the Spear of Lugh. It’s a red wood bead, wood for the shaft of the Spear, and red for the blood that his spear head had to be stored in so it didn’t burn everything down. Smoky Quartz for the East Wind and Land to the left, Sea to the right. 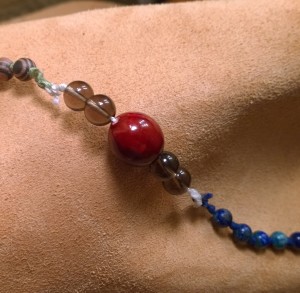 This is a closeup of the Lia Fal bead, just turquoise of a similar shape and size as the rest of the treasure beads. It is surrounded by the South Wind smoky quartz beads. Sea is to the top, and the Lady’s triquera knot is there. Green soapstone for Her, symbolizing the trinity nature of some of the Sovereignty goddesses of the Celts. 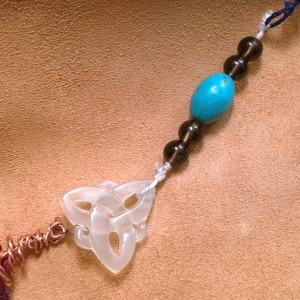 This is a closeup of the Spiral Gate. When I heard “spiral gate” the first time, my brain went to a Double Helix of the DNA. So I created this with two twisted wires that are wrapped around into the bead. I also added another twisted wire inside to keep the spiral from stretching out under normal use. That’s what the descending group is attached to. 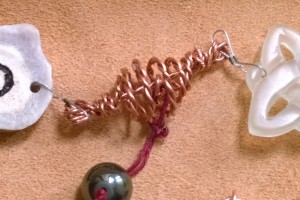 This is a closeup of one of the cauldron beads that are above the medallion. I’ve worked with Druidic visualizations for some time, and the Three Cauldrons are a major part of their medicine, it’s to the Druids what Bodily Humors were to the old doctors. It’s a way of explaining what is there. So I see these three beads as the Cauldron of Warming (physical, and lowest), the Cauldron of Knowledge (Mental and middle bead) and the Cauldron of Vocation (Spiritual and highest). Coming from the mundane land of the medallion, you go through the physical, mental and spiritual to the Gate and then through the treasures, deities and realms. 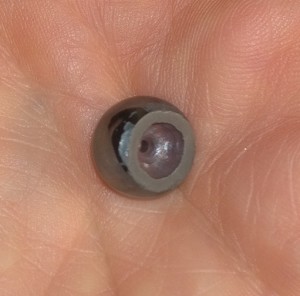 This is a closeup of the Medallion. I thought that a copper triskel would be good for this. I must note that I made this and everything in this rosary, except for actually making the beads. But all of it was put together by me, strung, and I dished out the Cauldrons too. 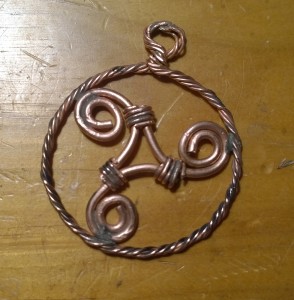 Detail of the Spiral Gate and Cauldrons. 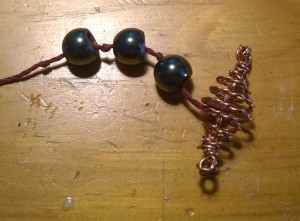 Closeup of the Three Realms. The one on the left is the Land, wood beads at about 6mm each, knotted on a green bamboo cord. The middle is Azurite/Malachite and represents the Sea. Blue cord. Finally the Sky is done with Turquoise/Howlite beads on a Steel blue cord. 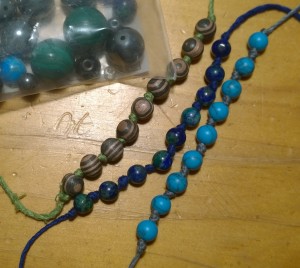 My personal practice has me with the Sea below us, the Land around and with us, and the Sky above us. The visual is of a tree, with the branches and leaves stretching for the sky, while the roots burrow down to the water table, or the sea. Since the Sea is the pre-life, the last world we existed in, and the land of demons or those who are evil and wish us harm, it is also a lower vibration. To those on THIS plane, they are a place that we don’t want to go to, we escaped from there to come here. The Land is where we are at now, this lifetime, where we learn and advance and improve ourselves to move on, to the next world in they Sky. We ascend upward to a place that is more pure, more perfect and better than here. And once we manifest and incarnate there, THIS world becomes the Sea, that world becomes the Land, and the one above it becomes the Sky. It is the same reason I placed the Treasures where I did, the Cauldron in the West, the Stone in the South, the Spear in the East and the Sword in the North. THey correspond to the four provinces of Ireland. And since my personal deities are Herne and Rhiannon, I used things I was comfortable with for them. I checked with the author of Circle of Stones while I did this and she told me that ultimately it was MY practice that I was designing this for, and that my visuals and beliefs should take precedent.

The colors are important as well as the materials and stones. I am probably going to have to restring the whole thing at some point with cable to keep it from falling apart.

So, I also did up the prayer round and printed it into a small book I’m currently hand binding to use as not only a missal, but also as a notebook.

Now to start the lessons.

Print This Post
Posted in Erin's Journal, My Articles, Personal, The Tree