The Wheel of the Year


The Wheel of the Year

It occurred to me as I did some work on another board that I don’t have an explanation of the Wheel of the Year and our cycle of the seasons here.

So I’m about to rectify that oversight.

First, look at this diagram: 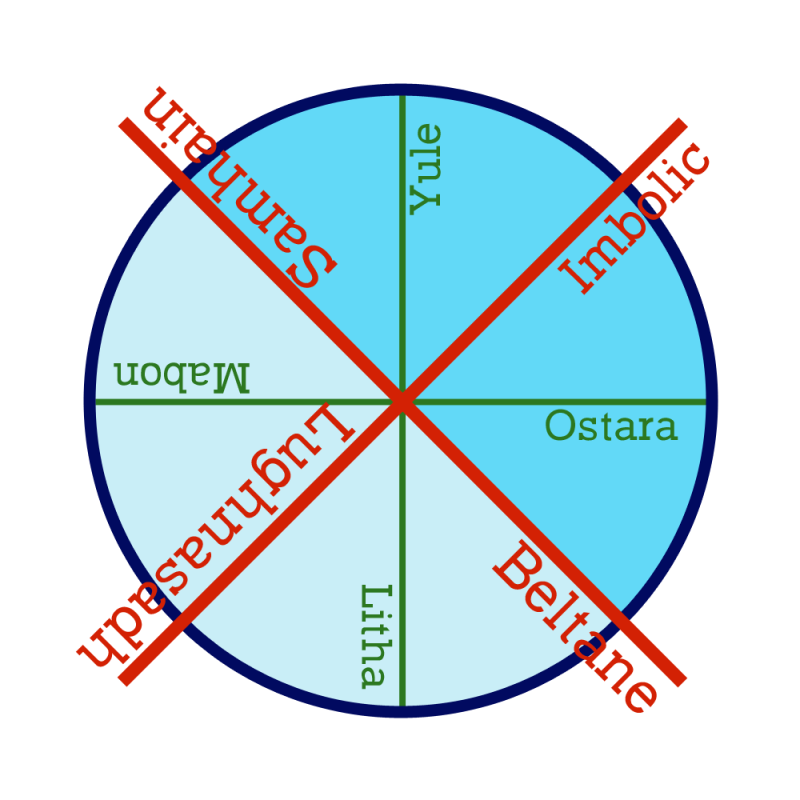 Nothing too horrible about that, nothing too different, other than the visual.  I wanted a simple graphic to use for this, not one with the extra art that a lot of people love.  So here we go.

First thing you notice is that the Fire Festivals, the Greater Sabbats, are in red and extend past the wheel.  The Cross Quarters, the Lesser Sabbats, or the ones we can actually see as the Solstices and Equinoxes are shorter and in green.  And then there’s that shading difference between one half and the other side.

That shading is the most critical part, actually.  In my practice that’s the Light Half of the year and the Dark Half of the year.  It shows up in Seax-Wica and in other traditions as typical boundary points for worship.

Everyone will agree that there are times when there’s more sunshine in the world and less sunshine in the world.  We call this Winter and Summer.  It’s two of the four seasons.  According to the Mythology by Bullfinch, the Romans who were able to witness some of these rites only saw them celebrating Samhain, they intuited Beltane, and didn’t have a clue about the rest.  We know that Lugh declared funeral games for Lughnasadh for his foster mother Tailtiu, and while there’s no classical reference to Imbolc, it makes sense to have that one there.  Each of these were festivals either involving blessing by fire (Beltane) or extinguishing and relighting the fires from the sacred fires of the Druids (Samhain).

So we have a clear delineation between the light half and dark half of the year.

In Seax-Wica and in my mind, this is the structure that makes sense.

The Celts had come from a desert peoples, and they had a Sunset to Sunset day, the day started at sundown and continued to the next sunset.  So why wouldn’t they make Samhain the time of the new year, since the Dark Half of the year starts then.  And while we are at it, renew the fires, bless the children, feast our ancestors, do all the divinations and all the festivals of harvest and preparation for the Winter to come.  And since we need the Gods to help us through the winter, let’s talk to them and appease them and seek their blessings during this time.

That why, in Seax-Wica, this becomes the start of the New Year.  It is also the time of the Lord’s ascendance since He is responsible for taking care of us through the Winter, when subsistence hunters are the most important thing in the community, bringing in the meat to help us go through that lean time.  So you have the ritual of the God taking over for the Goddess at this time, leading us through to Imbolc, the mid point of his journey, then retiring his crown at Beltane to the Lady.

She naturally takes over in the time of the crops and the green growing things.  She dances in the fields and wild places, bringing growth to the Land wherever She is. She and her Lord ensure the fertility of the Land during Beltane, and bless the herds by fire and purification rites.  She blesses the babies and young that started their journey in this lifetime during the winter months, and divinations for the future of the Land and the Family are cast.

She continues to bless us as we go through the year to Lughnasadh when we celebrate the life of a wonderful foster mother to Lugh, then to Samhain and the harvest festivals where she lays down her distaff and blesses the People again with the rituals to help the God through the winter.

This is the basic cycle and one that makes sense to my mind and soul.

In other words, the Equinoxes which are on the horizontal line are when they wake up to get ready to do their job coming up.  Coffee, brushing their teeth, stretching, exercises, morning nookie with their fellow deity, breakfast and so on happens during those times.  They go to bed on the Solstices after a long hard half year of working.

On those “midpoint Greater Sabbatts”, the deity in question is looking at their love fast asleep, snoring, drooling, snuggling the trees or moss, murmuring in their sleep, etc.  And they are probably missing them like crazy, as those of us who have marriages where one partner is a day person, and the other is a night owl.

Since my lady wife and I have exactly that situation, it just appeals to me.  Which means that each deity gets 9 months of being awake total, 6 months of work work work, 3 months of deep sleep, and a total of 3 months of time to ramp up or calm down from the year.  Sounds like a marriage to me.

This kind of cycle for the Gods always made more sense to me than the “goddess always ascendant and god waxing/waning and dying being reborn immediately….” cycle that others believe in.  But I can also see how that works as well.

There’s actually two models in work here.  Goddess always there, and Oak King/Holly King happening, and Goddess in charge, god being born, growing, impregnating Her with himself, dying and she giving birth immediately to repeat the cycle.

This is typified in the story of Llew Llaw Gyffes and Blodeuwedd.  Llew is the king.  Blodeuwedd is literally made out of the Land, flowers and plants, to be his queen.  She loves him but sees Gronw Pebr and falls for him too. She colludes with Gronw to kill Llew, and finds out the horribly complex way to kill him.  The he is killed by Gronw, and Gronw takes over as king with Blodeuwedd and rules while Llew is turned into an Eagle and flies away.  His uncle, who is also responsible for creating Blodeuwedd, searches for and finds Llew, heals him and plots with him to take out Gronw.  Llew has Gronw stand in the same exact place that he had been in, and kills him the same way to take back over the kingship.

Mike Nichols does a much better job of explaining this that I do in brief here.  The Death of Llew, a Seasonal Interpretation

Which fits into the cycle of the seasons.  Given that soon after the equinoxes occur, the days get shorter and then longer, it shows that they are both courting the goddess of the land, in this case Blodeuwedd.  Blodeuwedd is the constant, she is the Land, the Sovereignty of the kingdom and the fertility of the very land they stand upon.  With this model, it makes sense that you worship the goddess, and the Gods are there and important, and one waxes and wanes over the year.  It’s an easy, observable means of interpreting the seasons and the Gods.

Further, *I* speculate that it’s not just the deaths that remove them, but a complete change.  Imagine that you know of a southern hemisphere, having taken the years to travel there, or to hear from traders who have.  In this southern section, say in this case, the continent of Africa if we are in Europe, Summer is there when Winter is where you left from.  Seems crazy right?

Sound far fetched?  So did Vikings finding the American Continent three centuries before Columbus screwed up and miscalculated, but there’s archeological evidence supporting this conclusion now.

But this model still supports the Light half and Dark half of the years.  The equinoxes are in the other guy’s time, sure, but it takes time to get your shit going when ever you switch up jobs.  I don’t think a month and a half is too much to ask for.  They change jobs at the Equinoxes, and really start making their marks at the very next fire festival.

Now we come to the holiday model that made the least amount of sense to me, but I can see it happening now.

In a lot of ways, this is the most simplistic form, and the one that is probably the most ancient.  I mean, you can actually SEE this cycle happening in nature.

The moon waxes and wanes through the year.  It takes 27.32 days to rotate through one “sidereal month”, to come back to the same percentage of the moon showing as when you started counting.  To go with that, you have the female fertility cycle, which last from 27 to 30 days depending on the woman.  So someone at some point in time said “Hey, I’m bleeding to the time of the moon phases!”

Thus the myths of the Goddess being the Moon were born.

So if the woman is the moon, then the reasoning must follow that the man is the sun, right?

So, the association with men and the sun began, and that same someone looked at the men and noticed the cycle of life could be associated with the life of the Sun.  Born, you are weak, you grow, become stronger, do the labor for your life during the middle of the life, slow down, become weaker, grow old, weaker still, and die.  And that sequence was plugged into the sequence of the Sun Cycle, starting on the shortest day of the year, Yule.

So if the Sun is God, then he’s growing in strength through the Spring, to reach his peak of vitality in the Summer.  He weakens over Fall and Winter to die in the Winter, to be reborn again and continue the cycle.  Which means that if the Goddess takes 9 months to give birth like human women, she must have been impregnated sometime in the Spring.

And then we look at Father Time and the whole “Old Man (previous year) and Baby (next year)” that we celebrate every December 31 and January 1.  Add to this the Janus association with looking back to the previous year and forward to the new year.

It is a simple model, but one that keeps the Goddess with us all year, and the God renewed in his rebirth every year.  So this is a good model, I just get a little squicked out with the God impregnating the Goddess (his mother) with the next God to be born at Yule again.  And that makes HER pregnant 9 months of every year, over and over again.  Talk about “Irish Twins”.  And then there’s the whole Oedipal Complex to deal with as well.

So to my mind, the cycle of wake and sleep that was explored in our first model makes the most sense to me.  It is also the official model of the Holidays that Seax-Wica celebrate.

And I hope this article has helped you out.

Print This Post
Posted in Beginning Wicca, Druid, My Articles, The Tree