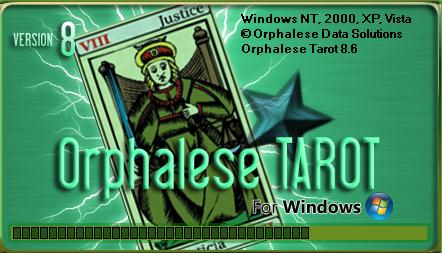 This is the first time I’ve reviewed a program, much less one about Tarot. When I joined the American Tarot Association, I decided to really try to get my tarot certification and to start an online and phone based reading business. For that I needed something that would be really easy to use, easy to interpret and easy to install.

I think I got all that in this program.

Don’t fool yourself; it will take some time to get used to the interface and the controls. So plan on spending at least two days (like I did) learning how to do everything before using it for clients. But once you are past that initial learning stage, the program is really easy.

Before I begin, I want to state this: I encourage you all to buy the registered version. You can download and install the program, but until it is registered, you will get a nag screen when the program is opened, and some things have limited functionality (like only being able to use three decks). I found that there were a few more options available to me once it was registered, but if I hadn’t the money I would have been satisfied with the free version.

That said, I paid for a Single Machine License. It was the most inexpensive option for me, and since I only use one computer, it was a good choice. I can upgrade that later to the one user license which will let me use it on up to three machines, but that’s a purchase for the future. 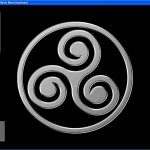 The interface of the program is clean and uncluttered. There is a deck of cards, a “docking square” for the undelt deck if you want to get it out of the way, and the background. By default this comes as just a solid color, but you can put a tiled image in there if you wish to so you can have a “tarot table cover” if you want. That’s it. All the commands are accessed by right-clicking on the deck, which gives you the program, card and reading commands.

You can have an unlimited number of decks in the program in the registered version, and if you are like me, I tend to have about five or six I rotate through depending on my needs. Currently I have the “Housewives Tarot”, “The Robin Wood Tarot”, “The Celtic Tarot”, a rune deck and the Pagan Tarot. Other users are constantly developing and uploading their own decks, and with just a few clicks you can access those decks and any spreads they have developed. 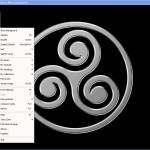 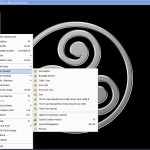 When you click on the spreads, you get three by default. You will have to make your own or download others. You get a three card spread, a six card star and the Celtic Cross. These are good beginning tarot spreads, but if you are like me and have several other spreads, it may be worth a look on their P2P network to download some spreads.

I did note that while the unregistered version only allows you three decks, the top three alphabetically in the Windows list, you can have as many spreads as you want. To my mind, this is a good move by them so that they can encourage you to use their program.

I designed and uploaded my two unique spreads, and downloaded about ten others. I modified a couple for my own use (mostly by moving cards around so I can see them) and uploaded those modified spreads as well. I found that it was possible to see the spreads before you download them, which is perfect since I hate cluttering my PC with useless data. You can also go in and delete old decks and spreads that you don’t want anymore. 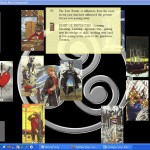 You can save readings for further interpretation later, and for emailing to clients. There is a screen capture option and a place where you can note the picture, doing a reading and sending it directly from your program to your client. My one word for that feature? Bonus.

You can toggle through the decks you have so you can get different nuances from different decks. You can compare the pictures of various decks to see which would be best. You can deal single cards in the middle of the reading if you want, and you can shuffle the deck while you have a spread out. There’s even a feature that will let you zoom in on a card so you can see the nuances of the artwork while reading.

While this is an excellent program, there are some problems.

First off, if you dock the cards in the docking square, there’s no way to access the program commands unless you undock the cards, then right-click. It’s a two step process and when you have a client on the phone, it may be a bit more time than you want to take. Since everything is off the right-click menu, including all the decks and spreads and how to deal the cards, it can be a bit of a pain to get it.

The next thing that is irritating is that you may have to tweak the spreads/cards extensively so you can use it. You get pop-up windows to display the card position and the card description if you want it, but not a lot of the spreads or decks out there have the descriptions in them. They may have the positions mapped out, but there is no guarantee that the author described it while making it. I had that problem with almost every deck I downloaded and almost all the spreads.

There was one deck that I had to totally re-write, but when it’s a non-standard deck of runes, it can be forgiven.

I would wish the hotkeys for the spreads were easier to use. There’s a bunch of hotkeys for the program options, but I wish there was a “repeat” for laying out another spread on top of the spread that is out. Currently the program forces you to gather all the cards up, shuffle and then re-deal them.

Also, features for selecting a significator and/or a segment of cards from the deck are non-existent. I occasionally like to find the significator for the querent and look at the cards immediately around that card as another tool for them, but the program doesn’t allow for that. Similarly, you cannot look at the bottom card of the deck either. There also aren’t any options for “jump out” cards while shuffling.

It is possible to turn off all the reversals though, which I appreciate. The only problem is that if you turn it off for all decks, and have it turned on for one, then you toggle to another deck, that deck will have a lot of reversals in it. There’s no really easy way to change that.

Personally? I’m going to keep this program for some time. While it will never replace a face to face reading, it will do wonders for doing readings over the phone or over the Internet. I’m giving this program Four Stars out of Five, the best that I have seen yet.

Print This Post
Posted in My Articles, Reviews, Witch

One Response to “Orphalese Tarot”

Ritual of the Mists
Italian Witchcraft